Gene editing could someday help people at risk of hearing loss from genetic mutations, according to research by a new Rice University faculty member, the Texas-based university announced on its website.

Xue (Sherry) Gao, who joined Rice in the fall as the Ted N. Law Assistant Professor of Chemical and Biomolecular Engineering, is co-lead author of a new Nature paper that reports on the promise of gene editing to treat autosomal dominant hearing disease.

Gao performed the research while a postdoctoral associate under the guidance of David Liu at Harvard University. She said that while hearing diseases are typically not life-threatening, hearing loss is the most common human sensory impairment and has a substantial impact on individuals and society.

Many genetic mutations affect the sensory hair cells that amplify acoustic vibrations and translate them into electrical nerve signals. Gao said humans are born with about 12,000 hair cells that do not regenerate spontaneously if damaged. It has been reported that one in every 1,000 infants born in the United States has genetic mutations that contribute to deafness. Nevertheless, she said, few treatments are available to slow or reverse genetic deafness.

The researchers used rodent models of human genetic disease since a rodent cochlea—the organ in the inner ear that sends sounds to the brain—is strikingly similar to that of humans, Gao said. They focused on editing hair cells inside the cochlea, which they found suitable for the delivery of one-time, nonreplicable edits through Cas9/single-guide RNA. The RNA is a ribonucleotide (RNP) protein complex designed to specifically disrupt genes associated with hearing loss.

“Delivering the RNP complex instead of DNA into the cochleae showed significantly fewer off-target effects,” Gao said. This enabled the researchers to effectively disrupt one genomic site containing a single point mutation and avoid the billions of other sites available for modification.

Eight weeks after injecting the protein complex into the cochleae of rodents with progressive, genetic hearing loss, the researchers observed higher hair cell survival rates compared with those in a control group that did not receive the injection. 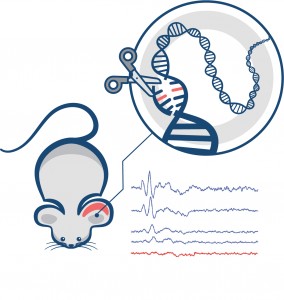 In a new “Nature” paper, a Rice University professor outlines a strategy that uses gene editing to slow the progression of a genetic hearing disease. Illustration by Xue (Sherry) Gao

Tests that measured brain waves in response to audio cues showed the treatment significantly preserves the animals’ hearing compared with the control group. The treatment also helped preserve the injected animals’ acoustic behavioral reflexes, according to the researchers.

“We believe this is a leading study on using CRISPR-Cas9 genome editing technology to treat genetic hearing diseases,” said Gao, whose lab is at Rice’s BioScience Research Collaborative. “We hope to develop more advanced genome-editing tools and test them on other animal species to demonstrate their safety and effectiveness as we move them toward humans.

“I’m definitely looking for collaborators at Rice, the Texas Medical Center, and in Houston who also are interested in developing genome-editing technology,” she said.

Gao’s primary collaborators on the Nature paper were co-lead author Yong Tao and Zheng-Yi Chen of the Massachusetts Eye and Ear Infirmary.

The Defense Advanced Research Projects Agency (DARPA) and the National Institutes of Health supported the research.